Reporting on the Provincial Government's actions regarding flood preparedness 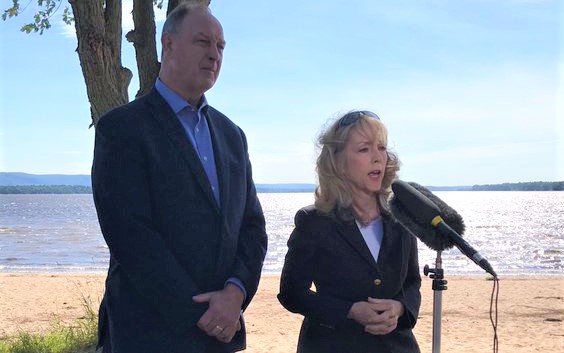 March 9, 2020 – Local Kanata-Carleton MPP Merrilee Fullerton is pleased the Natural Resources and Forestry Minister John Yakabuski made public the Ontario Flooding Strategy in advance of the spring melt along the Ottawa and Mississippi Rivers. The announcement today addressed the recommendations made in Fall 2019 by the Province’s Special Advisor Doug McNeil and it outlines the next steps to reducing risk and increasing preparedness for flooding.

At a press conference in Minden this morning, Minister Yakabuski explained the Ontario government is taking action to protect residents and communities. He stated, “We know that we can’t prevent flooding in Ontario. We can become more resilient to it. Our strategy is designed to increase public awareness and help us to be better prepared and equipped to respond to the devastating effects of flooding.”

To read the press release and information issued by Minister Yakabuski, please see below.

MPP Merrilee Fullerton comments, “This Ontario Flooding Strategy lays out the actions the Province is taking and the many ways the Ontario officials are working closely with our municipal partners at the City of Ottawa, our federal counterparts, local conservation authorities, as well as industry and Indigenous communities to help implement a coordinated, effective response to possible flooding in our City.”

“It is very much a collaborative approach. The City of Ottawa is responsible for flood preparedness and response, but as residents in West Carleton saw last year, the Ontario Government is active in providing support for people in need. Whether it was waiving the Electrical Safety Authority fees for reconnecting electricity or the Disaster Recovery Assistance for Ontarians program, provincial officials were assisting where they were called upon,” says the MPP.

For a review of the supportive actions taken by the Ontario Government in the wake of the spring 2019 flooding, see:  Provincial Government Assistance For Residents In The West Carleton Flood Zone

“I will continue to report on provincial government support services,” and MPP Fullerton adds, “The Province is in constant contact with other levels of government to ensure any necessary response is efficiently acted on. The health and safety of our residents is the top priority for all concerned.”

MINDEN — The Ontario government is taking action to protect people and communities from the effects of flooding by reducing flood risk and helping Ontarians to be better prepared for flooding events.

"We know that we can't prevent flooding in Ontario - we can only become more resilient to it," said John Yakabuski, Minister of Natural Resources and Forestry. "Our strategy is designed to increase public awareness and help us to be better prepared and equipped to respond to the devasting effects of flooding."

"We're listening to people from across the province who have been affected by flooding, and that is why we're taking a whole-of-government approach and calling on the federal government, our municipal partners, conservation authorities, industry and Indigenous communities to work with us to implement the actions contained in this strategy."

"Building healthier and safer communities is our top priority and that's why we're taking action to strengthen the province's preparedness for flooding," said Laurie Scott, Minister of Infrastructure and MPP for Haliburton-Kawartha Lakes-Brock.  "We'll continue to speak with Ontarians and we'll keep learning more as the strategy is implemented."

The government's flood strategy was informed by public consultations and the expert advice of Doug McNeil, Ontario's Special Advisor on Flooding.