Premier Doug Ford was in Ottawa yesterday and visited Kanata-Carleton

December 7, 2019 -- It was a busy Friday, December 6th for the Ontario Premier. The day started with Ottawa residents continuing an age-old tradition in the City, enjoying another spectacular Ottawa Christmas Cheer fundraising breakfast. The sold-out event drew a crowd of 750 and raised $106,850 in support of 21 local charities.

On news that this breakfast event would be cancelled due to funding and logistics (the first time since the 1950s it would not take place), the Provincial Government came forward to fund the breakfast and ensure the fundraising event went forward. Premier Doug Ford visited Ottawa to be present at the Christmas Cheer Breakfast - above the Premier is with local MPPs (l. to r.) Jeremy Roberts, Goldie Ghamari, Lisa MacLeod and Merrilee Fullerton - and below the Premier is serving with MPPs MacLeod and Fullerton.

The Premier met with Ottawa Mayor and City officials on a number of local concerns and also attended a roundtable on health care and long-term care issues, led by Kanata-Carleton MPP Merrilee Fullerton.

From downtown Ottawa, the Premier travelled to Kanata North to tour the Blackberry QNX facilities and speak with QNX founder Gord Bell.

He also had an opportunity to be briefed on the latest developments in the local high tech scene by the Kanata North Business Association. It is the second time this year that the Premier has had time with the KNBA to discuss the technology sector.

Below are a few photos from the Premier's tour of Blackberry QNX and discussion of autonomous vehicle technology. 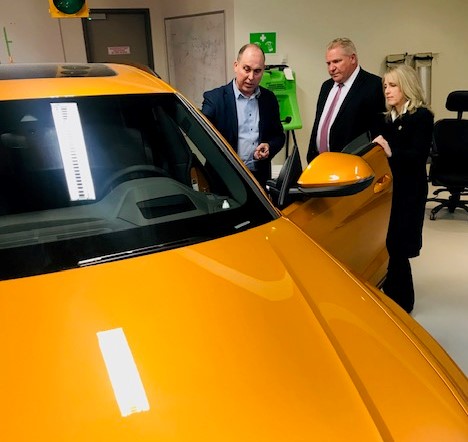 Relating to Kanata North and the high tech industries, MPP Fullerton recently provided constituents with an update of her activities regarding the Kanata-Carleton High Tech & Business Initiative, a report that has been shared with the Ontario Premier and a number of Cabinet Ministers.